Those of us di una certa età that is to say, who were brought up on a cultural diet of the Carry On films, Hugh and I, and Terry and June /Happy Ever After (anyone spotting a common link here?) may or may not be able to define clearly the expression ‘dithering’ but would instinctively know who to mention as prime exponents of said art. In the Carry On films, Charles Hawtrey would serve (ooh missus!), and for the Happy Ever After sitcom, it would have to be Beryl Cooke, who played Aunt Lucy. The common link is Owen John Scott, better known as the avuncular ‘Terry’ Scott. Terry made his film debut in 1957, playing a policeman in Blue Murder at St Trinian’s, and made such an impression in his police uniform that of his 26 other films, he played a police officer 13 more times. 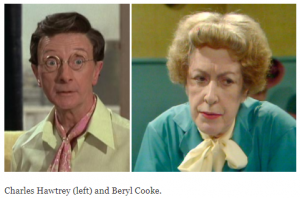 ‘Dithering’, I understand, is more inaction than action; the inability to make a decision, the hesitation about coming to a decision, and the accompanying nervousness that such an action causes for the ditherer. Therefore it’s as difficult for the ditherers as it is for the ditherees, who are frustrated due to their endless waiting to hear a clear decision although the ditherers seem to suffer more as a result of their hesitation, frequently showing tremors, and extreme nervousness. Italian translations underline this, with words like ‘esitare’, ‘agitazione’, and ‘incertezze’, which require no translation, I think. The Middle English verb “didderen,” means “to tremble” and ‘tremolar’ in Spanish confirms the instability inherent in the (in)action. There are also idiomatic collocations for linguistic variation, such as ‘ditherer’, ‘in a dither’ or especially ‘in a bit of a dither’, i.e. not the Full Monty, full-blown dither. English synonyms include humming and hawing, hesitation, and hanging back and that’s only the words that begin with ‘h’. Dilly-dally and shilly-shally are close to the mark too, as is ‘flapping’, or ‘in a flap’.

These expressions and other synonymous expressions are part of the general language but as often happens with language, different language communities employ and ascribe different sector-contingent meanings to everyday expressions. People in more technical fields – especially those working with digital audio and video – will understand dithering, and the verb ‘to dither’, as a more positive quality, something that seems to make their work easier. According to Wikipedia, “Dithering is used in computer graphics to create the illusion of color depth in images on systems with a limited color palette. In a dithered image, colors that are not available in the palette are approximated by a diffusion of colored pixels from within the available palette. The human eye perceives the diffusion as a mixture of the colors within it.” 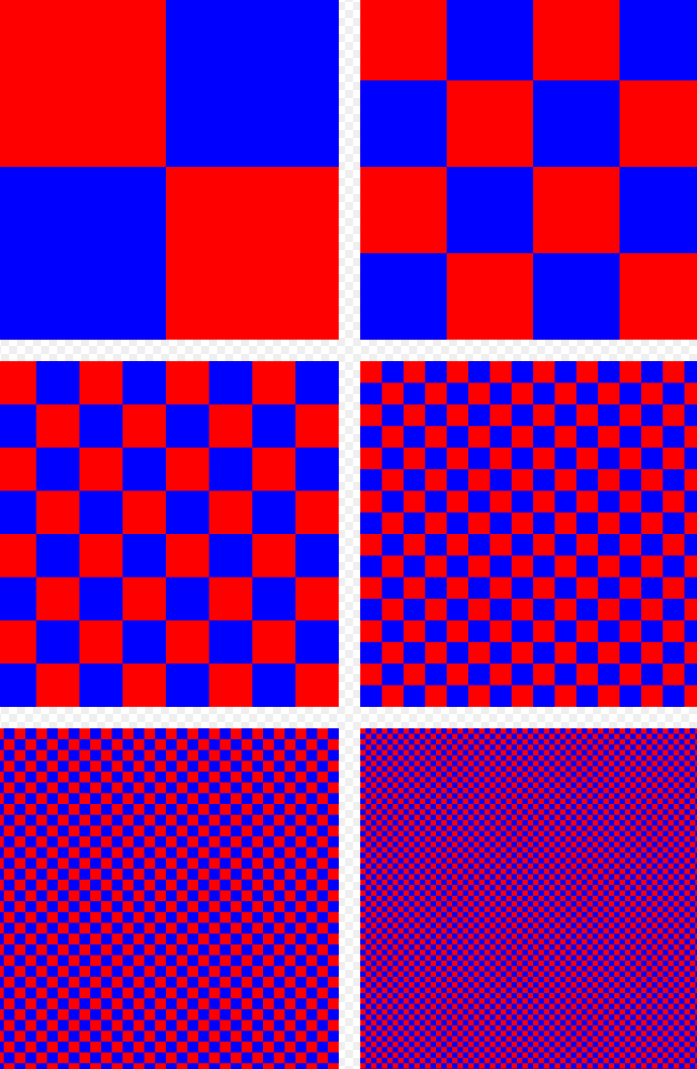 An illustration of dithering. Red and blue are the only colors used but, as the red and blue squares are made smaller, the patch appears purple.

In terms of audio, again according to Wikipedia, “Dither is an intentionally applied form of noise used to randomize quantization error, preventing large-scale patterns such as color banding in images. Dither is routinely used in processing of both digital audio and video data, and is often one of the last stages of mastering audio to a CD.”

If I understand it (at) all, and I’m not sure I do, it seems that dithering is a process which ‘simulates’ something that would be too expensive, too time-consuming or too complicated, and possibly all three, to perform, and especially a process that is unnecessary. The result of the dithering process is, I would guess, more than satisfactory for the viewer or listener, and they are probably (blissfully) unaware that dithering had taken place.

Ani DiFranco takes an idiosyncratic view of the wor(l)d and in her song Dithering, the opening track on her Allergic to Water album, she attempts to bring together the two uses discussed above. She sings of a person unable to relax because she is overwhelmed with facts, information and the ubiquitous big data that characterises modern life. She states, in the opening lines:

The drive to classify, categorise and just generally understand astonishing amounts of information is time-consuming and probably unnecessary although more and more we are expected to be aware of what’s going on everywhere and to have an instant opinion on it without having time to digest the information beyond the knee-jerk headlines. This is a perfect Petri dish for Fake News, of course. Who has time to check everything?

So what is the effect on people in Ani’s situation? She comments:

I got clutter in my closet, clutter on my bed.
Clutter in the office, and clutter in the shed.
And I can’t find a thing in all of this confusion.
I can’t think a thought all the way to its conclusion.

So much mental clutter that there seems no way to see the needle in this haystack of information, and the outcome of all this is her inability to think an idea through to its logical conclusion. Her strategy, such as it is, to deal with the situation resorts to the combination of the technical and the corporal:

Here we hear Ani dithering/filtering a tsunami of information and attempting to juggle all her abilities in order to form and then express an opinion. “Ask me anything, about anything”. Big Data is the bane of modern life and Ani DiFranco, like most of us, has a lot of shit in rotation.

All images from Wikipedia. Dithering can be heard here.