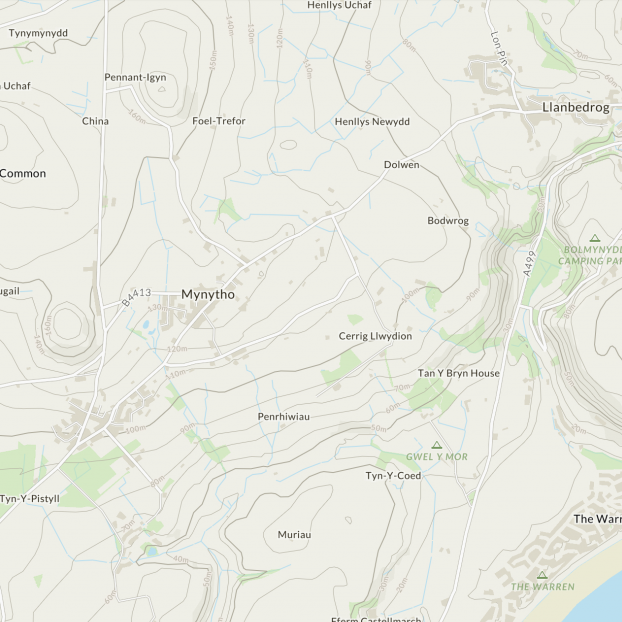 It is very common for newspapers, and the media in general, especially when speaking of areas affected by ‘natural’ or ‘non-natural’ causes (think forest fires and oil slicks) to try to use comparisons with existing areas – cities, provinces, states – which are well-known and understood by local people and therefore easy to visualise. That, I think, is a very useful way to inform the public of the extent of the damage, if indeed damage it is, although using comparisons of this kind can be helpful in other, more positive ways.

The key word in the previous paragraph is ‘local’. Obviously saying that an oil slick covers an area the size of Brisbane may mean a lot to people in Australia but very little to people in other (most?) parts of the world. If you were a stranger or a tourist lost in North Wales and were trying to find Mynytho, and someone kindly informed you that it was approximately halfway between Llandbedrog and Nant-Rhiwdar, that would be of very little use to you, unless you knew where both of the other villages were, and the distance between them.

Logically enough, the media try to employ meaningful comparisons, and using local areas as a ‘yardstick’ seems to me to be the right way to go about it. However, the cities, provinces, islands and other territorial entities do not often match the affected area exactly, or even very closely, so fractions and multiples come into play (one quarter of Wales, 7 times Berlin, 3 Tenerifes, 86 Copenhagens…) and even then the comparison is approximate, at best, although I would imagine that for most people, approximate is close enough.

What happens though when the wrong territory is chosen when making the comparison and the idea transmitted to the reader/viewer bears little resemblance to the real size of the affected area? *Recently* (July 2017, original post), a large chunk of ice has broken off (‘calved’ is the official, lovely expression) from the Larsen C ice shelf in Antarctica and the media are having fun describing the size of this iceberg, and the threat it imposes. Iceberg A68 is large, without a doubt, but how large, and how large a threat is it?

To the best of my knowledge, no one disputes that Iceberg A68 is approximately 5,800 km2 in area and I’m going to use that figure as the basis of what follows, but first, a tangent. We have all seen comparisons of this type many times in the media and – exaggerating wildly – I would say that small areas are frequently measured in / compared to *football pitches and larger areas in ‘Belgiums’. ‘Football’ here means soccer, not American football. I do not know why Belgium seems to have cornered the ‘country as comparison’ market but I do see the sense of the football pitch comparison. Almost everyone can imagine the size of a football pitch and can calculate how long it would take to walk the perimeter of one, or indeed two, pitches. Therefore, a football pitch serves a useful purpose here. Not all football pitches were created equal and most football fans know that there is no official fixed size, but there are maximum and minimum sizes and the shape must, of course, be rectangular. For my own purposes here I am going to accept the size ‘preferred’ by many professional teams, namely 105 metres long and 68 metres wide, making an area of 7,140 square metres. More on this later. Tangent ends…

In the early days of this story I saw wildly differing comparisons in the press and in the social media, all quoting the ‘local’ comparisons, and most of the territories mentioned were unhelpful to me in visualising the size of Iceberg A68. Over the years I had often wondered about the accuracy of this type of comparison and therefore thought it might be a good moment to check the rigour of the media in the comparisons they published. I asked my friends via the social media to report what territories were being used in their local media and I received a lot of useful information. Thanks to all. All I had to do then was use Wikipedia to learn the real area of these territories and get to work comparing the real area of these territories to Iceberg A68. I have to say that I was astonished to see the results and I have created some charts to display the accuracy, or more frequently, the inaccuracy of the published comparisons. 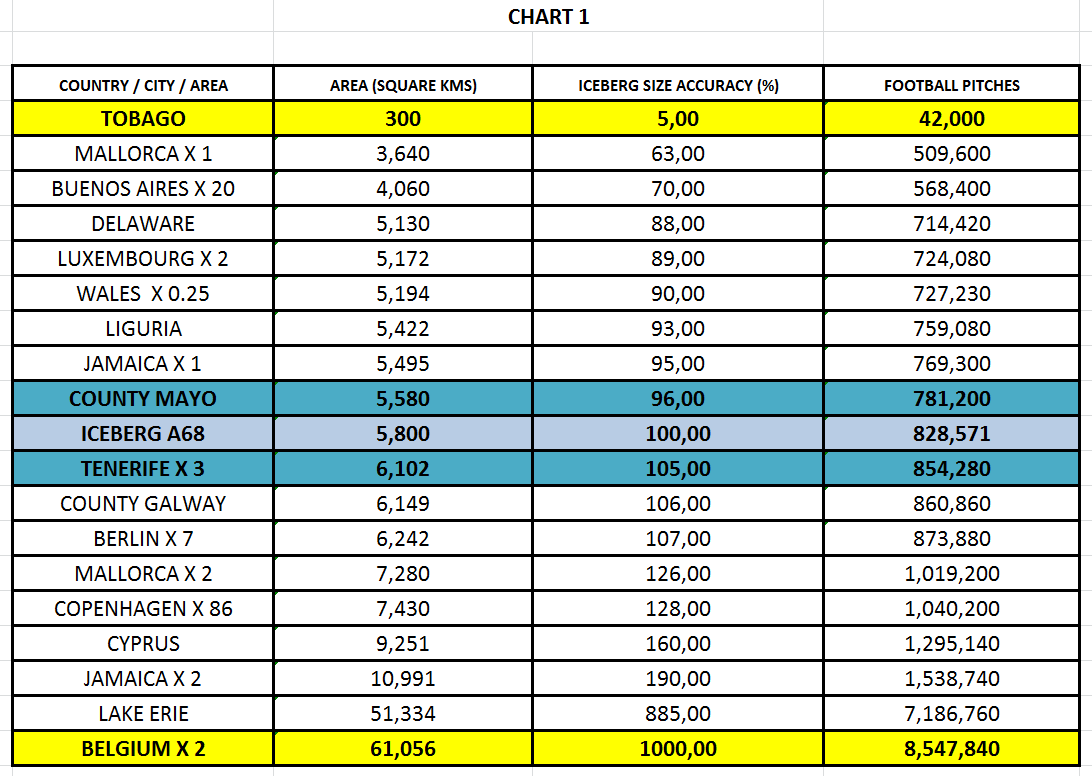 In Chart 1 there is a list of approximately 20 territories starting from the smallest (the island of Tobago) to the largest (two Belgiums). In order to make it clear which comparisons are too small and which are too large, I have assigned Iceberg A68 a value of 100 as the baseline. There are *nine territories with values less than 100 (smaller than the Iceberg) and also *nine territories with values more than 100 (bigger than the Iceberg). *Jamaica and Mallorca were both mentioned twice and I have included both the values of both islands. If all these figures are to believed, both Jamaica and Mallorca are simultaneously bigger than and smaller than Iceberg A68.

Which comparisons were the most accurate?
In Chart 1 I have coloured the row containing the Iceberg A68 data in blue and the two rows nearest to this blue row are highlighted in Turquoise to show their proximity to the size of the iceberg, and therefore the accuracy of the comparison.

Congratulations then to County Mayo, reported by Dermott Sellars although he doesn’t mention his source (please send it, Dermott, if you can remember). County Mayo, at 5,586 square kms, is 96% the size of the Iceberg and no one came closer than this. The nearest comparison on the plus side was/were the ‘Three Tenerifes’, reported by Lea Schramek, quoting the Süddeutsche Zeitung, which amounted between them to 105% of the Iceberg. Pretty close. The majority of the data are around the central point and the extreme data are, as you can imagine, found at the extremes. Tobago, and the double Belgium, are highlighted in yellow to show the extreme under– and over–estimate, respectively. More information on this in Chart 2a and 2b.

Looking at Chart 2a (above) we see that the row with data on Iceberg A68 is again in blue and represents 100%; it is the baseline. The row containing data on County Mayo is almost as long (in fact it is as long, as I could not split a cell) as the Iceberg and I also include – also in yellow – Mallorca as a comparison. Finally, at the top of Chart 2a we see data on Tobago. The single Excel cell compared to the 20 cells of the baseline show that the size of Tobago is 5% of the size of Iceberg A68.

In Chart 2b (above) we see the opposite phenomenon; comparisons which exceed reality by large degrees. In this chart, Iceberg A68 again serves as the baseline ‘100’ (in this case represented by two cells). The three Tenerifes shown directly below Iceberg A68 show how close the comparison is and then we see the two extreme inaccuracies at the ‘too big’ end of the continuum. Lake Erie, as we see from the yellow cells in that row, is almost 9 times bigger than Iceberg A68, and finally the two Belgiums which added together make an area of 61,000 square kms, more than 10.5 times the size of the iceberg.

Returning to football pitches, alert readers/anoraks will recall that one football pitch is 7,140 square meters and in one square kilometre we could fit in 140 EUFA-sized football pitches. Column 4 (in Chart 1) shows the total area of the territory in square metres divided by 140, in order to calculate the number of football pitches for all the territories in the chart. The smallest number is obviously Tobago and even though it is only 5% of the size of the iceberg, the figure of 42,000 football pitches is not really helpful. More than a dozen football pitches is about the limit, I think; beyond this the average person does not find this kind of information remotely helpful. The fact that one could play more than 8 million football matches simultaneously in Belgium without encroaching on another pitch in order to ask for one’s ball back is surely interesting, but hardly enlightening.

Maybe the press could benefit from a new scale of comparisons, possibly adding a new, intermediate, scale and renaming the too big and too small side.