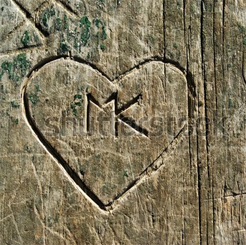 The millions of summer visitors who have travelled to north Wales since 1992 don’t know how lucky they are compared to the millions who travelled through Conwy on summer holidays, bank holidays and just for the occasional day at the beach before 1992. Obviously, those who came along the north Wales coast before and after 1992 will be able to compare the two situations and therefore count their blessings. The reason for their good luck was the opening, in October 1991, of the Conwy tunnel. Previously, all traffic was forced to wind its weary way through the narrow streets and tight bends of the town, known far and wide for its medieval walls.
Walled cities built in the thirteenth century may be attractive to tourists but were hell for anyone forced to travel along the A55 between Bangor and Chester. The archways of the old city were frequently blocked by coaches, articulated lorries and caravans whose drivers failed to notice the warnings about the restricted height and width of the road as it weaved its way through the town. A 5-mile journey through Conwy, especially in high summer, and more especially on August Bank Holiday Mondays, frequently took 2 or 3 hours, unless one took the alternative route over the Sychnant Pass, and that was no picnic either, although a much better alternative for car drivers.

Nowadays, drivers heading for or returning from the beaches of north Wales pass under the city and its splendid estuary, oblivious to all the misery suffered by previous generations of trippers. The A55 now takes you smoothly on your way and many people wouldn’t even know they were by-passing an attractive city. But back in the 1970s and 1980s, the seaside route took you through the town, past the park and the hospital then under the railway bridge before heading towards Penmaenmawr and all points west.

This was also the route that many people of my generation took when hitchhiking towards Bangor and Anglesey, especially when returning from summer work in Llandudno or, more frequently, after having missed the last bus that theoretically took us home from Llandudno’s Winter Gardens, or Payne’s, the two most popular discotheques for young-ish people in our part of north Wales. The bus would pick us up outside the Bangor Museum at 7.30 on Saturday night and drop you back there if you were sober enough, or smart enough, to remember to be at the bus stop at 12.30. Miss the bus and you had three options; hitchhike, wait in the railway station until the first morning train home, or walk. I tried all three options and more than once decided to hitchhike but that option turned out to be no quicker than walking, and a 17-mile walk, in the dark, after drinking and northern soul-style dancing for 4 hours isn’t the best way to spend the night.

The railway bridge in Conwy Morfa in those days had a little graffito -“Chimp loves Bray”- painted on one of the bridge supports, and thousands of people; truckers, tourists and people too stupid to catch the disco bus home, all passed under the bridge and possibly thought, as I did, “Who are Chimp and Bray?” and maybe even “But does Bray love Chimp?” That speculation is no longer available for the people taking the Conwy tunnel as the heavy traffic passes elsewhere.

For the last 25 years I have used the tunnel on my way to Chester, Manchester and Liverpool and haven’t entered Conwy through this route for many a long day. Until this June. I had often thought about this graffito – I drove past it three times a week for many years – and heading to Liverpool airport recently with lots of time to spare I decided to get off the expressway and enter Conwy through the old road. I had completely forgotten about the Conwy Morfa Caravan Park, even though I used to deliver goods there in the summer. I went under the railway bridge and took a sharp left, then parked the car. I walked back to the bridge and to my surprise saw that the graffiti is still there, not as fresh and visible as previously but still recognisable after all this time. Attempts had been made to cover up the text (maybe Chimp no longer loved Bray?) but it’s still there.

That got me thinking, again; who were Chimp and Bray? Was their love reciprocal? Do they still live locally? Together or separately? Did they ever go beyond an expression of (teenage?) love or was the painted declaration an impulse thing which soon wore off? Maybe Chimp and Bray were not from Conwy; maybe they were holidaymakers immortalising some summer love and maybe they never saw each other after that summer. They may be astonished to know that their declaration still remains for all passing souls to see.

This kind of immortalisation of a possibly ephemeral moment has its risks of course, and in many fields. Sailors while on shore leave in foreign ports wake to find themselves tattooed frequently regret their impetuosity, and insobriety, especially if the tattoo includes a woman’s name. The name of the ship on which you served was usually a far safer bet. My friend Idris Lewis had a tattoo on his forearm which read ‘Pat’ but he was married to Doris for many years. Who was Pat and why did she deserve the tattoo? How did Doris feel when she saw this tattoo every day?

Love can be fleeting and love may last forever – according to the songs, at least – but one thing’s for sure; people change their life partners less frequently than footballers change clubs. It is very unusual these days to read about a ‘one-club man’; they are rare, especially in the top bracket where even over the hill players – in European terms – can still pick up hefty pay packets in China, the Gulf States,  the USA, and elsewhere. Almost no professional footballer now plays for the same club all his working life; maybe some amateurs or semi-professionals do but not in the top flight. Managers, players, agents and most of the general public know this so how do we explain the brain farts of Robert Nesbitt and Chris Atkinson? Mr Nesbitt was the man who got a thigh-sized tattoo of then-Newcastle United striker Andy Cole. Unfortunately, Cole signed a deal to join Manchester United before the ink was dry. And talking of Manchester, Man City fan Chris Atkinson was so convinced that Brazilian star Kaká was joining the club that he had Kaká’s name tattooed on his chest. The Brazilian didn’t sign for City, of course; he moved to Real Madrid in June 2009. 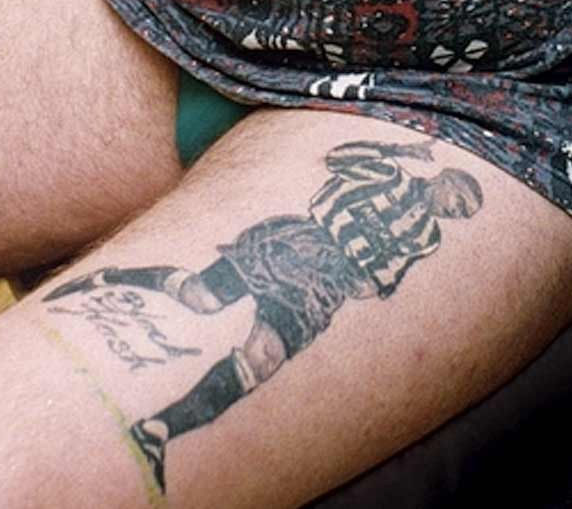 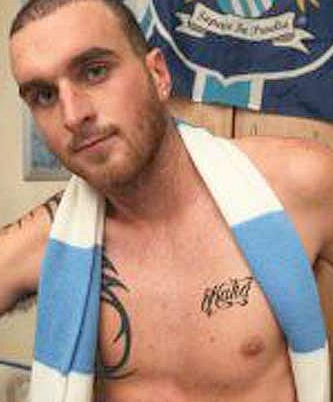 Graffiti, whether painted, scratched or carved, are nothing new and certainly not another sign of twentieth-century vandalism. They have existed probably since writing itself got a grip on our ancestors. There are graffiti in the ruins of Pompeii and probably older examples buried under the surface somewhere. “Ancient graffiti, inscriptions that have been incised or scratched into wall-plaster, comprise a special branch of epigraphy. They differ from inscriptions on stone in several respects. An inscription on stone may be commemorative, dedicatory, sacred (to name just a few classes of inscription), but in almost all cases forethought has gone into the preparation of the text and the inscribed monument. Graffiti, by contrast, are more often the result of spontaneous composition and are the handwritten creation of the “man on the street.” Since graffiti are scratched into friable wall-plaster, they are more easily perishable, but when they do survive they are almost always found in situ, unlike many stone inscriptions that have survived to the present day through re-use.” This last quote taken from  http://ancientgraffiti.wlu.edu.

I suppose the modern-day equivalent of this ‘spontaneous’ quest to express an opinion are the tweets and sexting which often seem a good idea before you hit the ‘send’ button. A report in today’s ‘Ara’ newspaper says that a third of adolescents between 14 and 18 have received images of minors nude or almost nude on their telephones, according to the University of Lleida. Once it’s out there, it’s difficult to get the genie back into the bottle. The soldiers who carved comments into Hadrian’s wall little thought that their opinion would be available for all to see 2,000 years later, and not only for people travelling to the wall itself. Let’s hope that people think twice before committing a foolish thought, comment or sexually explicit comment on any wall, anywhere, and especially a facebook wall. If either Chimp or Bray are reading, please get in touch… 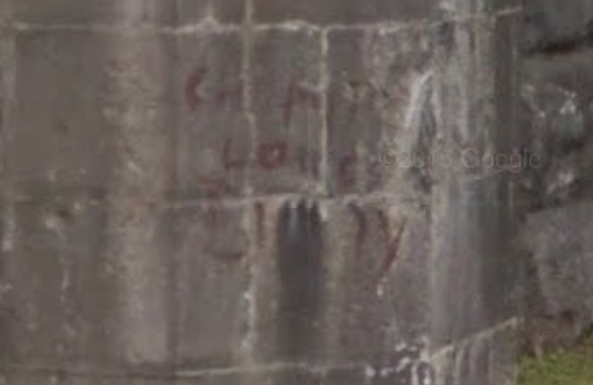 14 things I should know.