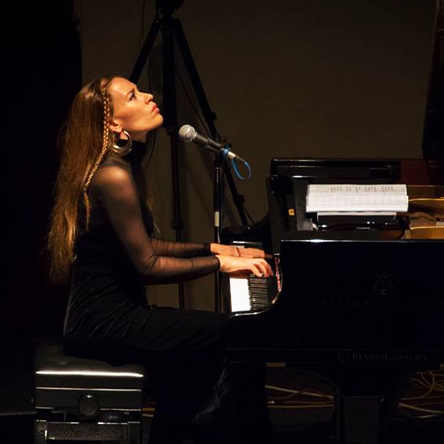 Way back in the good old days of the mid-eighties (pace Thatcher, Poll Tax, Section 28, etc) I lived briefly in London. I didn’t have (m)any friends so I spent a lot of time alone strolling around, getting my geographical and cultural bearings and generally exploring stuff. I was living in Hampstead at the time and spent an almost obscene amount of my time at the Everyman Theatre but at the weekend I used to venture down to the river where I had heard there were free Sunday morning concerts in the foyer of the Festival Hall. It was also possible to get a bite to eat there so I could read the Observer, listen to a free concert and eat at the same time, something which was impossible in my home town.

The concerts were generally performed by people who were unknown, or little-known, at least to me, and the programming was quite eclectic; string quartets one week, jazz trio the next, piano and clarinet duo the next and so on. One particular Sunday morning the featured artist was a young woman, mid-twenties I would guess, playing solo piano and doing jazz-tinged standards. She started off extremely hesitantly, doing a song written by the Gershwin brothers called How long has this been going on? and it was probably a very brave or very foolish choice of an opener at what seemed to be, judging by her nervousness, one of her first concerts, or maybe her first solo concert, or maybe her first concert in a big venue, even if it was in the lobby rather than the concert hall itself. Whatever; she was nervous and didn’t get much better for the next two or three numbers. I decided to have a stroll around the Haywood Gallery and return when the food was available.

I guess an hour had passed when I returned and I sat down to see the last couple of songs. I can’t remember what the penultimate one was but she finished off by repeating her opening number, but this time she nailed it. It was wonderful to hear. Her piano playing was strong and forceful and her singing was full of nuance and confidence. It was hard to believe that less than an hour had passed between the first and the second version and although for me and the other people present it was obvious that there was a big difference, I can only imagine that her confidence must have increased gradually as she moved through her songbook and although it must have been quite a torturous learning curve, she was finally able to pick up the song and give it a good workout.

In hindsight maybe I should have stayed to witness the process of losing the nerves and gaining confidence. As she was packing away her songbook our eyes met and we exchanged a look as I silently mouthed, ‘well done’ to her while I was applauding. She nodded and silently said ‘thanks’. In the Hollywood version I’d be played by John Cusack and she’d be played by Keira Knightley. I don’t know what her name was, or if she ever became a (successful) professional musician. I never heard or saw her again.

Recently (2019?) I saw Rosa Diletta Rossi in Carlo and Malik on Netflix (Nero a metà in the original Italian) and I think I’d like her instead of Keira Knightley.

The staggers and the jags