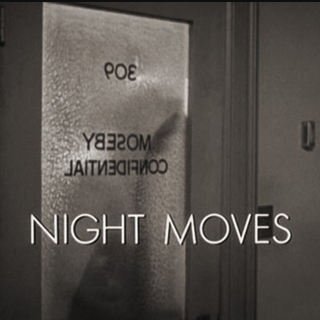 Arthur Penn’s 1975 neo-noir classic Night Moves was shown *recently (August 2014) here in Catalonia on TV3 under the title La nit es mou. As we all know, the world of translation in general (and literary/creative translations especially) is fraught with danger and therefore mistranslations and misleading translations are easy to find. There are many reasons to explain these problems and I don’t propose to list them here today nor add a list of my ‘favourite’ mistranslations. It’s all been done before so today I’ll just concentrate on the above film and suggest some reasons why I think the translator got in a pickle.

Part of the confusion is due to the fact that many, many words in the English language fall into more than one grammatical category. This doesn’t generally cause problems between prepositions and adverbs but with words of greater semantic importance (nouns and verbs especially) things can get out of hand. Catalan can have similar problems in some cases, such as ‘porta’ = door and ‘porta’ = bring, or ‘restaurant’ (noun) and ‘restaurant’ (participle of the verb ‘restaurar’) but in general this is much less problematic than in English.

Another factor here is the lack of an article in the English version of the title and this is very common in English and much less common, not to say impossible in Spanish and Catalan. English frequently sees no need for articles when dealing with abstract concepts like love, death, peace and many more (“Love hurts”; “Death, where is thy sting?…”), although English does require an article when these nouns are specific; ‘The love I feel for you’, ‘A love like ours doesn’t happen every day; ‘The Death of Jesse James’ and so on. This tendency can often apply to non-abstract nouns too, as is the case here in ‘Night Moves’. A native English speaker would understand the title to refer to moves (or movements) that take place in the night. In other words it’s clear that ‘moves’ is a plural noun here rather than a third person singular verb. We could rephrase the title as ‘Nocturnal Moves’ [Movements], or ‘Moves [Movements] in the Night’, and it would be equally clear. In ‘La nit es mou’ it is obvious that the translator mistook the noun ‘moves’ for the verb ‘to move’. In the English version it is clear that events are taking place against the background of the night, while in the Catalan version it is the night itself which is moving. It is not impossible for this to be the case, but here I believe it is just a mistake; a simple mistake which could have easily been avoided with a little common sense and more sensitivity for the English language.

One final element involves the homophones ‘night’ and ‘knight’, referring to the chess piece, ‘cavall’ in Catalan. Harry Moseby, the private eye protagonist, is a chess fan and re-plays classic chess games a couple of times during the film, although on a portable magnetic board, unlike the classic board and pieces that Moseby’s fictional predecessor Philip Marlowe kept to amuse himself when he wasn’t too busy, or needed to get one, or both, of General Sternwood’s daughters off his mind. Knights move across the chessboard in an oblique, crablike way and the route that Harry follows towards the solution of the case is certainly a twisted one. A crab motif appears on the door of one of the characters in the film’s apartment; another reference, I believe, to the knight in the title.

The 16-year-old Melanie Griffith appears in her first role as the nymphet who is the object of Harry’s search. She is 57 years old today.

Happy Birthday to her.