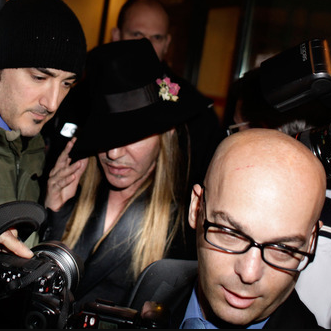 see update to original story at end of this piece.

The title above is The Guardian‘s headline on its report.

I do not know if John Galliano made the remarks quoted below or not but I find some details of the press coverage interesting. It seems, according to The Guardian, that his anti-Semitic rant is qualified by the adjectives “alleged” and “drunken”. Let’s look first at ‘alleged’. The Guardian states that “Galliano was escorted home by French police late on Thursday after what police said was a drinking session that ended with him hurling insults at a couple”. If the police say it was so, we can dispense with the ‘alleged’ part, or is that a little naïve of me?.

“Galliano had been drinking at a bar beforehand. He was arrested and taken to a police station, where a sobriety test showed him to be just over the legal limit.” He was arrested in a cafe. What kind of sobriety test is this? He was not driving a car. He was near his home. Did he have a car with him? Are there sobriety limits in bars now? Who sets them and what are they? According to The Independent, Galliano “had drunk the equivalent of up to two bottles of wine” – this is “just over the legal limit”, but for what? Driving? Drinking? Partying?

“The flamboyant designer was briefly arrested”, says The Guardian, suggesting (at least to me) that he is no longer arrested (unarrested? de-arrested?). The Independent quotes the Paris police as stating that “Galliano was facing criminal charges and would appear in court on a date to be fixed”.

So what did he say? “The couple, a Jewish woman and her Asian boyfriend, told French radio Europe 1 that he had said to them: “Dirty Jewish face, you should be dead” and “Fucking Asian bastard, I will kill you”. He allegedly repeatedly called the woman “ugly” and a “slag”.” A police official said that Galliano also ‘exchanged slaps’ with the couple. That sounds pretty racist to me, but may I suggest to Mr Galliano that ‘exchanging slaps’ is not the most efficient way to kill anyone.

What, if anything, can be said in Mr Galliano’s defence? His lawyer, Stephane Zerbib, admits that “There was an altercation. Mr Galliano was verbally attacked but at no moment did he make these insults. We have witnesses to that effect.” Zerbib went on to say that Galliano was not at all in the “state of mind” described and “will explain later”. Presumably when a suitable excuse is concocted. Zerbib added that “legal action would be taken against those making such accusations”.

Apart from the lawyer, here come Galliano’s defenders from the world of fashion. One magazine style director described Galliano as “a vulnerable soul” and “the last person I would have imagined to be racist”. She said: “There is something fragile about him. He exposes so much of himself in his work, and that makes him vulnerable in a way the rest of us can’t even imagine.” How dare she presume to know the extent of my, or other people’s, imagination? A Parisian colleague said: “Women love John because he has a very feminine side. Reports of this assault are so out of character. I’ve never seen him being violent towards anyone.” “Fucking Asian bastard, I will kill you” and “Dirty Jewish face, you should be dead” – right, very feminine side. Sounds more like a football hooligan to me.

“Police, who escorted Galliano to his home after the incident, suggested the outburst was prompted by “stress” over his next major Dior show, the Autumn/Winter 2011 Collection.” Nice to know that the humble Parisian gendarmes are capable of making such accurate psychological analyses on such scant contact, but good too to know that JG is still facing charges. Whether he ‘does time’ or not is neither here nor there – it would be too much to expect him to go down, especially if it’s a first offence, which it would be as far as I know. Like Andy Gray and Big Ron Atkinson, fired from lucrative media contracts after actual, not “alleged” sexist and racist comments, JG will bounce back into a bigger contract elsewhere. And Dior get brownie points for suspending/sacking him and having a zero tolerance anti-racist and anti-Semitic policy which they uphold. Dom Perignon and new contracts all round!!

UPDATE: March 1st. from the guardian

>>John Galliano has spent more than five hours at a French police station being questioned about an alleged drunken rant in a Paris bar, in which he was said to have hurled racist and anti-semitic abuse.<< (so much for ‘briefly arrested’).

>>His future as creative director of Christian Dior looked increasingly doubtful as video footage emerged of an apparently separate incident in which he is seen saying: “I love Hitler”. << Oops.