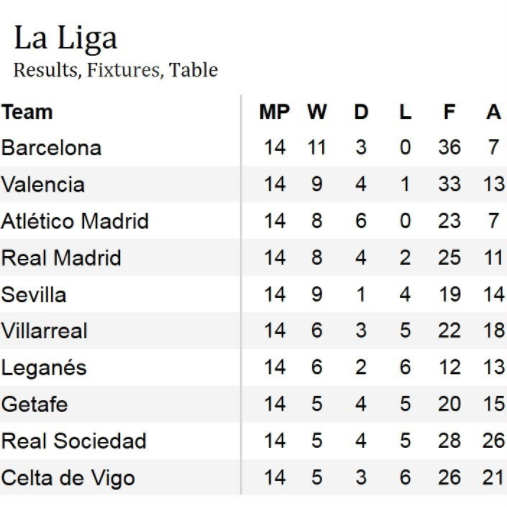 For the sake of the argument presented below, in the UEFA Football leagues (including the English Premier League [EPL] and the Spanish League ‘La Liga’ [LL]) a victory is worth three points, a draw (a ’tie’ in the USA, and possibly elsewhere) is worth one point and a defeat gets you no points, and maybe a UB40 for the manager.

The team in second place begins its tenth match with three points available to them should it win, a victory giving it 28 points and the lead in the table.

In contrast, in Catalonia, or at least on Catalan television, the league table would look like this.

The “(-1)” refers to the fact that the team in second place (LL Team Two) has played one game fewer than the leader (LL Team One).

Eight wins (8 x 3 =24) and one draw (1 point) does not equal 26 points. How to explain this apparent mistake? The explanation lies, I believe, in different ways of looking at the same situation, of different (national?) perspectives. The EPL Team Two begins its tenth game one point behind the leader and has to win the game to take over the leader position, or draw the game to become joint leader (the goal difference would decide this but it’s irrelevant to this case). In other words, the team has to go out onto the pitch and take the points which are waiting to be won.

In contrast, the ‘extra’ point that the LL team has comes from the score situation at the kick-off, obviously 0-0. The different perspective mentioned above means that both teams ‘start’ the game already with a point for the 0-0 draw. They ‘already’ have an extra point just for turning up on time and participating. Goals conceded or scored during the match decide if the team loses its one point, hangs on to it or gains three. This is undeniably true, of course, and if no goals are scored then both teams get to keep the point they started with. This obviously also true for the EPL but the view there is that the teams have to fight for the point that they earn if they manage to finish with the same number of goals as their opponent. The impression is that the English teams start with nothing and have to ‘look for a result’; they don’t ‘hang on’ to a level-score situation in order to claim a point as the Spanish football teams do.