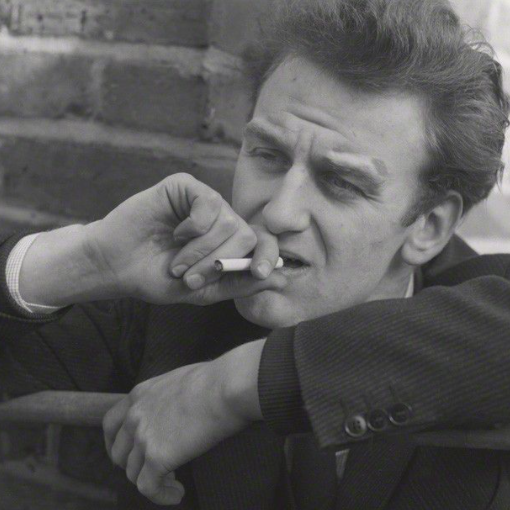 In one of his first film appearances, “The Loneliness of the Long Distance Runner” (1962) the 20-year old John Thaw, was already dreaming, in his chat with fellow borstal boy Tom Courtenay, of “a great big Jaguar”. Thaw, son of a long-distance lorry driver rather than a long-distance runner, would have to wait 25 more years until his dream came true, when the first episodes of ‘Inspector Morse’ appeared on British television screens. Morse’s famous Regency Red Mark 2 Jag would later become “much sought-after”, in estate agent language, and be sold for more than £100,000.

When I finished watching the last of the 33 episodes of ‘Inspector Morse’ I decided that a little Dickens might be in order, social change is as good as arrest, after all, and watched David Lean’s version of Great Expectations, which features a lawyer called Mr Jaggers. This name was not unknown to me; I had read the book a couple of years earlier and had seen the film a couple of times in the distant past so I remembered that there was a character of that name in the book/film and when the actor appeared on the screen I was ‘gently reminded by’ rather than ‘slapped in the face with’ the coincidence of another word in the Jag/Jags/Jaggers family.

Very soon after this reminder, I bought Tom Waits’ latest album ‘Bad as Me’, only to find on the track ‘Satisfied’ a reference to “Mr Jagger and Mr Richards”, also known as mick ‘n’ keef, or Nanker (&) Phelge, if you prefer. It seemed I couldn’t get away from the man (Jagger), only to find that his daughter ‘Jade Sheena Jezebel Jagger’ (yes, three Js) was that very same day hogging the ‘celebrity’ section of my favourite newspapers with a new collection of jewellery that she had designed. Around about the same time I saw a recent-ish remake of ‘Great Expectations’ starring Ethan Hawke, Anne Bancroft and Gwyneth Paltrow. The normally interesting Chris Cooper appears as the modern version of Joe Gargery although the whole thing is “like the knocks of beggarmen, and should not be minded” as the anonymous narrator of The Third Policeman would say. The name Jaggers does not appear in the film due to its relocation to the USA. Nevertheless I did get to thinking about other similar versions of Jags, etc and then remembered a song from the late 70s by The Jags, a short-lived band which is best filed under ‘one hit wonders’, unless number 75 in the UK charts counts as a second hit. The hit was called ‘Back of my Hand’ and it came and it went and was fun while it lasted. The members of the band went on to other, not necessarily better things.

‘Jags’ of another kind appear in the phrase “the staggers and the jags” in two songs on the same album by Gillian Welch and David Rawlings. It appears in their epic ‘I Dream a Highway’, the last, long, languid and luscious track on their ‘Time (The Revelator)’ album and also appears earlier on the same album in the song called ‘April 14th, Part 1’. That most useful reference site, the urban dictionary, informs me that ‘staggers and jags’ refers to drunks, something I would never have guessed from ‘jags’ alone but ‘the staggers’, and the context, makes it all clear.

One of the many verses in ‘Highway’ runs: “Which lover are you, Jack of Diamonds? Now you be Emmylou and I’ll be Gram…”. This verse is interesting for the two musical references. Firstly, the obvious (to me and other Dylan fans) Bob Dylan reference in the ‘Jack of Diamonds’ but Gill’n’Dave may have been thinking of Waylon Jennings, Tex Ritter, or any of the many other country-blues folk who have recorded the song of that name. More importantly, they sing of Emmylou (Harris) and Gram (Parsons), an earlier and more ‘traditional’ country duet; a version, some might say, of Welch and Rawlings themselves. Before following this thread, let’s take a detour to recall that Emmylou played on Dylan’s ‘Desire’ album, most notably on ‘One more cup of coffee’. OK, getting back to Gram Parsons, he is thought (by some experts, but not all) to be the writer, or at least part-writer of one of the best-loved Rolling Stones songs, ‘Wild Horses’, although this song is credited to ‘Mr Jagger and Mr Richards’. Although even Mick Jagger’s brother says that Gram wrote it and Mick himself talks of Gram being involved in the writing, Gram Parsons got not a dime for it. Parsons felt he was ripped off in the music business generally, not just in this case, but he may (who knows?) have been thinking of (t)his song when he advised the band ‘Fallen Angels’ to ‘protect’ their song publishing.

‘Staggers’ is also a brand of jeans found “throughout” New Zealand (wouldn’t ‘in’ New Zealand have been enough?) but they’re now available everywhere through their online shop, like almost everything else. This reference is for Robert Southon; who says I know nothing of the antipodes?

“I drink so much whiskey, I stagger when I sleep” is a lovely line from Blind Willie McTell’s ‘Dark Night Blues’, and as Bob Dylan says/sings, “nobody can sing the blues, like Blind Willie McTell”. High praise indeed from Dylan; a man, like Mick Jagger, not averse to putting his name to another man’s —or woman’s— song. ‘When the Levee Breaks’, a version of which also appears on Led Zeppelin’s fourth album, was actually written by Joe McCoy and Memphis Minnie, and Dylan’s version appears on his ‘Modern Times’ album, and is credited to Dylan as the songwriter. There are, it has to be said, many differences between the original song and Dylan’s version, and indeed listening to Dylan’s extensive bootleg collection shows that he frequently borrowed material from earlier, frequently traditional songs and ballads, as indeed did many other singers in the folk music world. It was all fair game back then. ‘Modern Times’, though was released in 2006, long after he hit the big time and certainly long after he needed the royalties, so why not put ‘trad. arr’ as so many people used to do in those long-lost, innocent times back in the 1960s?

Dylan also had a ‘jag’ back in the 60s, a Fender Jaguar guitar, that is, although most people associate him with an acoustic guitar, or maybe a Stratocaster in his later career.

Oxford Town, Oxford Town.
Everybody has got their heads bowed down.
The sun don’t shine above the ground.
Ain’t a–goin to Oxford Town.

This was a song written by Bob Dylan about racial segregation and the ‘troubled’ enrolment of James Meredith in the University of Mississippi, in Oxford Mississippi, which led to race riots in 1962. A far cry from the dreaming spires and neatly–manicured quadrangles shown in every episode of Morse’s Oxford.

John Thaw was no stranger to alcohol —although a quick chorus of “let he who is without sin cast the first stone” may be in order here— and in more than one episode of Inspector Morse did he drive away from one of his favourite riverside pubs with a bellyful of best bitter. Is it going too far to suggest that he may have ‘staggered to the jag’ on his weary way home?

There is another blog on the Inspector Morse spin-off called Endeavour. You can read it here.